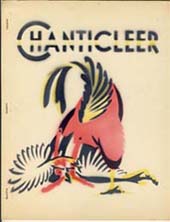 Chanticleer was a science fiction fanzine published by Walt Liebscher.

Chanticleer is a metonymy for a rooster or cockerel. It was published in Battle Creek, Michigan, U.S.A. in the 1940s. Later, Walt Liebscher moved to Los Angeles, California, where he published one more issue. The first two issues featured colorful silk screen covers, and all issues featured creative typed borders done by editor Leibscher. The seventh, and last issue, was released in 1946.