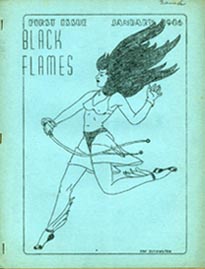 Black Flames was a science fiction and fantasy fanzine by Jim-E. Daugherty.

'Margaret of Urbs' was also known as 'The Black Flame' in the first part, called "Dawn of Flame", of Weinbaum's post-apocalyptic novel, The Black Flame.

The cover of this 22 page fanzine was by Fay Dishington.

Jim-E. Daugherty was better known in Los Angeles as Virginia Laney Daugherty, where she was a member of the Los Angeles Science Fantasy Society. She attended the 1946 Pacificon 4th World SF Convention, and is featured in the program.

Along with Atres Artes, Chanticleer, En Garde, Fan, Guteto, Ichor, Le Zombie, Lethe, Nova, Shangri L'Affaires, The Timebinder, and Voice of the Imagi-Nation, Black Flames was included in the anthology fanzine Pacificon Combozine for the "Pacificon" Convention in July 1946.