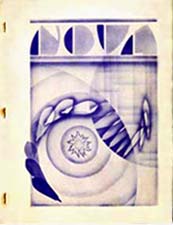 Included in issue 3 was the article "What Price Fanzines", by Julius Unger, about the value fanzines would have in the year 1992, due to their limited runs. Also included were photos from classic horror films.

Three issues of this fanzine were released, the first appearing in November 1941, the second in May 1942 and the third, and last, in Winter 1943.

Along with Atres Artes, Black Flames, Chanticleer, Fan, Guteto, Ichor, Le Zombie, Lethe, Shangri L'Affaires, Voice of the Imagi-Nation, Nova was included in the anthology fanzine Pacificon Combozine for the 1946 Pacificon Fourth World Science-Fiction Convention, as was the fanzine that Abby Lu and Al Ashley did for the Fantasy Amateur Press Association, entitled En Garde, and the fanzine E.Everett Evans published on his own, The Timebinder.

In 1945, E. Everett Evans became the first editor of The National Fantasy Fan.