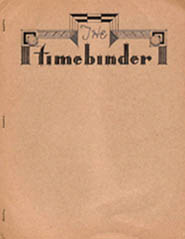 Seven issues were published from 1944 to 1946, though the first and last issues each had a variant edition.

Issue #1.3 came out in July of 1945. Contributors of writing included Helen Wesson (The (Unspeakable) Thing). The fourth issue was released by the end of 1945.

The fifth issue, #2.1, was published in early 1946. About half the issue was taken up by a 15-page letter from Chauvenet. This issue also reprinted poetry by William Blake. #2.2 came out in the summer of 1946.

The final issue, volume 2, number 3, appeared from Tendril Towers in Los Angeles, California, in 1946. Contributors of writing included Joe J. Fortier (Starlight), Charles D. Hornig (The Fantasy Fan), and Gus Willmorth (Fantasy Advertiser). Also featured were poems by Donald B. Thompson (Other Tracks, Phanteur) and Ollie Vane, and letters from Russell Woodman (Triton) and others. The cover was off-set printed with art by Jack Weidenbeck.

Along with Atres Artes, Black Flames, Chanticleer, En Garde, Fan, Guteto, Ichor, Le Zombie, Lethe, Nova, Shangri L'Affaires, and Voice of the Imagi-Nation, The Timebinder was included in the anthology fanzine Pacificon Combozine for the 1946 Pacificon Fourth World Science-Fiction Convention. (The Combozine version, numbered 2.3A, consisted of only 8 pages, whereas the regular version, numbered simply 2.3, contained the full 32 pages.)

From 1941 until 1943, E.E. Evans was one of the co-editors of Nova, along with Abby Lu and Al Ashley, and Jack Weidenbeck. He also edited issue #2.1 of the zine Bonfire, the first official publication of The National Fantasy Fan Federation (NFFF), for October 1942, and then returned after a two-issue hiatus, to edit issues #3.1 through #3.8 from May to December of 1944. With issue #4.1, in January 1945, TNFF retitled its offical organ to The National Fantasy Fan; Evans remained editor for the first five monthly issues under this new title.

In 1941, Evans also published A Digest of a Talk Given by E. Everett Evans at the 1941 Denvention, and in 1946, with Dale Hart, Evans published Tomorrow on the March, A.E. van Vogt's Guest of Honor speech from Pacificon.