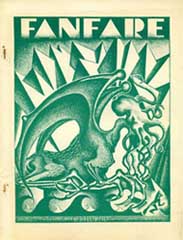 FanFare was a science fiction fanzine published by Art Widner in the 1940s, and co-edited with Francis Paro and Henry Earl Singleton.

FanFare was first published in 1940. It was a hektographed publication of around 28 pages. It was the official publication of the Boston Science Fiction Association, "The Stranger Club".

Francis Paro left the publication after the third issue and Widner and Singleton carried on till issue 6, when Singleton left also. Widner continued to publish till 1943, with 10 issues produced.

Contributing artists include Bob Jones, Damon Knight and Roy Hunt (The Alchemist). The cover of issue 8 featured a portrait of Cthulhu by both artists.

Earl Singleton also published two issues of the fantasy poetry fanzine Nepenthe. Art Widner was also publishing another title, called YHOS, from 1940 till 1945 and then, after a long break, resumed publishing it from 1979 till 2001.