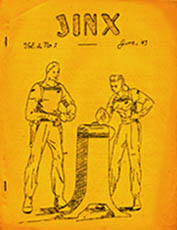 Jinx was a science fiction fanzine by Harry Jenkins, Jr.

Jinx was distributed by the Fantasy Amateur Press Association. It was a Dixie Press Publication, which also released The Southern Star and Fanart, among other titles.

At the same times as he published Jinx, Harry Jenkins was also the Art Editor for The Southern Star, and published Fanart as well. He also published two issues of the fanzine Science Fiction Hash in 1942. He contributed to a number of other fanzines and was also published in Amazing Stories.