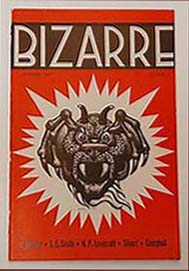 Bizarre was a fanzine devoted to weird fiction edited by Jack Chapman Miske and Walter Marconette.

Previously Walter Marconette had published Scienti-Snaps, and Jack Miske had become co-editor later on. They had ended that zine in 1940, and in January 1941 began publishing Bizarre. One issue was published of this 22 page zine.

Most notably, this is the first publishing of H. P. Lovecraft's "The Thing In the Moonlight". Lovecraft had related a dream to Donald Wandrei in a letter, who in turn passed it on to Miske, who added introductory and closing paragraphs and turned it into a short story. Aside from the two paragraphs, the description of the dream is verbatim from Lovecraft's letter.

This was the only issue of Bizarre to appear.