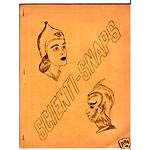 Scienti-Snaps was a fanzine edited by Walter E. Marconette, and later Marconette and Jack Chapman Miske, and published as an Empress Publication.

Scienti-Snaps was a 26 page fanzine published in Dayton, Ohio, U.S.A. that was comprised of fiction, poetry, columns, articles and reviews. The first issue appeared in January 1938. Thirteen issues were released, the last in Summer 1940. The first four issues were hectographed and starting in February, 1939, the remainder were mimeographed. One issue was especially prepared for the First National Science Fiction Convention in 1938.

Contributions included the first printing of "The Very Old Folk" by H. P. Lovecraft, which was featured in the Summer 1940 issue, dedicated to his memory. Also published in the fanzine were titles such as "The Chestnut Mare" by David H. Keller, "The Nightmare Lake", a poem by H.P. Lovecraft, "Kaleidoscope" by Walter E. Marconette, "H.P. Lovecraft: Strange Weaver" by J. Chapman Miske, "Songs in a Minor Key", by C.L. Moore, "Midas" by Charles R. Tanner, and "Fantasy Footnotes" by Harry Warner, Jr.

Contributions of art work were from Marco Nice and Walter Marconette.

The last issue of Scienti-Snaps was published in Summer of 1940 and it then became Bizarre.