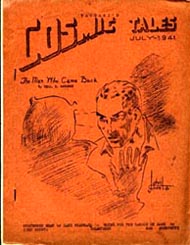 Cosmic Tales was a science fiction fanzine released in the 1930s and 1940s.

Cosmic Tales had a number of editors over the course of publication, but it was begun by James V. Taurasi in New York, U.S.A.

By this time Taurasi was editing several fanzines, and so he handed Cosmic Tales over to Louis Kuslan and his sister Gertrude Kuslan, who were also publishing The Nucleus. They released issue 7 in October/November of 1938. The 8th issue was also published by the Kuslans, and was released in December 1938 with a cover by Taurasi. They continued as editors for the next four issues. The 9th issue was released in March 1939. The 10th and 11th issues also appear in 1939. It featured a regular column by Jack Speer, entitled "Thots from Exile", devoted to the controversial politics in fandom, which made Cosmic Tales very popular.

A special issue, called Cosmic Tales Special appears in 1939; it is the "First World Science Fiction Convention Issue", and the cover announces that it is "Featuring Stories by Nils Frome, Cyril Kornbluth, and Percival Twinkletose", the last undoubtedly a joke.

Summer 1939 sees the appearance of Vol.1 No. 13. The last issue published by Louis and Gertrude Kuslan is Vol.2 No.1, the second anniversary issue of Cosmic Tales, released in Summer 1939, An announcement on the cover states that "henceforth it will be published by John Giunta". John Giunta had previously published the fanzine Amazing Wonder Tales in 1938. The cover is by Taurasi. Vol. 2 No. 2 is edited by Giunta as announced, and appears in 1940 with a cover by Giunta.

Another issue is not seen until the April-May-June issue of 1941, which finds James Taurasi the editor again, but now publishing in England. This issue included "Fantasy and Science Fiction", by H. P. Lovecraft; as well as contributions by John Giunta, Sam Moskowitz, and Frank R. Paul. H. P. Lovecraft's "What The Moon Brings" had been given to Nils Helmer Frome for the 3rd issue of his zine Supramundane Stories but Frome decided not to publish a 3rd issue and gave the story to Taurasi for Cosmic Tales.

James Taurasi would go on to publish the news weekly Fantasy-News, The Science Fiction Yearbook 1957, and Fantasy-Times, which won the first Hugo Award for Best Fanzine in 1955.