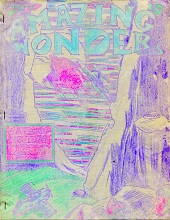 Amazing Wonder Tales was a science fiction fanzine edited by John Giunta, and published by John Guinta and Louis Maurino.

John Guinta went on to edit one issue of the fanzine Cosmic Tales in 1940 and, later in the 1940s, to co-edit some issues of Fantasy-Times with James Taurasi and Raymond Van Houten.