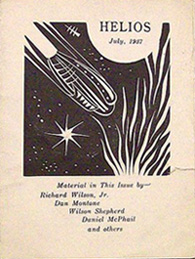 Helios was a science fiction fanzine by Sam Moskowitz.

The first issue of Helios was published in June 1937 in Newark, New Jersey, U.S.A., edited by Sam Moskowitz and Alex Osheroff. It was a hectographed, stapled publication. Six issues were released, with issues two to six edited solely by Moskowitz. The last issue appeared in May 1938.

Contributors of art work included Morris Scott Dollens, among others.

After Helios ended in May 1938, Sam Moskowitz immediately began two new fanzines that same year; Different, published in May 1938, and New Fandom, released in September-October 1938.