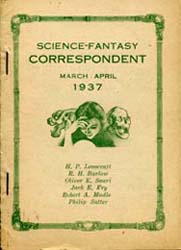 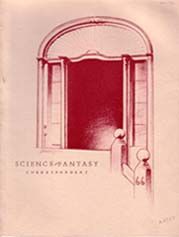 Conover was a teenager when he began writing letters to Weird Tales and corresponding with other fans of weird fiction. He decided to do a fanzine, editing it from his Cambridge, Maryland, U.S.A. home in the mid 1930s. The first issue appeared in November-December of 1936, the second in January-February of 1937, and the third, in March-April of 1937.This last issue was published by Corwin F. Stickney in Belleville, New Jersey, U.S.A.

Soon after beginning his fanzine he had begun writing to H. P. Lovecraft, and they began a regular correspondence. Lovecraft did an interview with Conover for his zine and supplied him with out-of-print poems and short stories he had written. He also put him in touch with other writers of weird fiction.

Issue 1 contained Homecoming. a sonnet by Lovecraft, and issue 2 featured In a Sequestered Providence Churchyard Where Once Poe Walked. Other contributions would appear in Amateur Correspondent, including a portrait of Lovecraft that Conover had commissioned the artist Virgil Finlay to draw. After Lovecraft's death in 1937, Conover stopped publishing his own zine, although he was an Associate Editor for Robert Madle's Fantascience Digest, which ran from 1937 till 1940.

Later in life Willis Conover became a jazz DJ for Voice of America and was known everywhere around the world except North America, where his show was not broadcast. He also published a book of his correspondence with Lovecraft, called Lovecraft At Last, in 1975. That same year he published one last issue of Science-Fantasy Correspondent, featuring letters from Lovecraft and Kenneth Sterling's memoir, Caverns Measureless to Man.