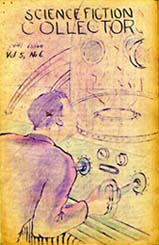 Science-Fiction Collector was first published May 1936 by a 16-year-old Morris Scott Dollins of North St. Paul, Minnesota, U.S.A., who published 14 issues before handing over editorship to John V. Baltadonis of Philadelphia, Pennsylvania, U.S.A. He kept publishing this title till 1941, with 17 more issues released. Under his editorship, it was a Comet Publication.

Morris Scott Dollens was one of the first editors to introduce the varied-coloured hektographed fanzine, which Baltadonis would perfect. According to SF historian Sam Moskowitz, "Science-Fiction Collector became the leading representative fan journal".