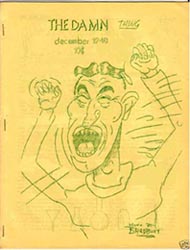 The first issue of The Damn Thing appeared in November 1940. In that issue the editor writes, "I haven't bought or read a professional scienti-fiction magazine since the middle of 1939. They became so putrid I got sick." Instead, the editor is much more interested in the activities of fandom itself. Five issues of this title appeared.

There is much discussion of fan events, such as a movie night in which a projector being run by Ray Harryhausen, Arthur L. Joquel (editor of FMZ Digest, Specula, and Sun Trails) and Yerke almost catches fire; criticism of New York State fans and the goings-on there; and criticism of Fantasy Amateur Press Association fanzines. This fanzine was one of the very early fan publications devoted mainly to fan activities.

During 1941, The Damn Thing was a split zine with Shangri L'Affaires.