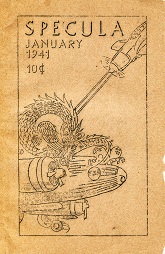 The second issue contained fiction by Joquel and Henry Andrew Ackerman; poetry by Mischa Jaroff and Corrine Ellsworth; and articles by Forrest J Ackerman, "The Rosetta Stone", by Walter J. Daugherty, and others.

Arthur Joquel also published the fanzines FMZ Digest and Sun Trails, and was the editor of Shangri L'Affaires for the years 1942 - 1944. As well, he was a contributing editor to Theosophia magazine in the 1940s.