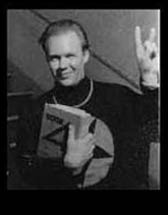 Arthur Louis Joquel II (1919-1974) was an editor and publisher of science fiction, fantasy and paranormal-oriented fanzines from the 1940s through the 1960s.

An obituary for Joquel, written by Forrest J Ackerman, was published in Luna Monthly #52 (May 1974).

When the young men and women of the future go out into the vastness between worlds, and are able to feel and sense space like a tide washing over them, and see the stars cold and clear and hear the music of the galaxy, it will bring to them a new realization of man's place in the scheme of things.

The humanity of future ages will possess within itself the consciousness of new dimensions about which we of today can only speculate. But the new adventure of the space age may bring to its pioneers a small part of that vast knowledge and understanding" (The Challenge of Space 213). 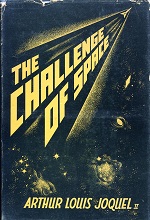