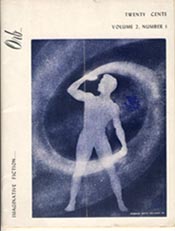 Orb was a science fiction fanzine by Bob Johnson and Charles L. Hames.

Orb began publishing in October/November 1949 in Greeley, Colorado, U.S.A. It continued its run into 1952, the last issue being Volume 3, #2, with 11 issues published in all. In the ad for Orb printed in Wastebasket, it called itself "the avant garde fanzine".

Joe Green wrote in the first issue of Confusion, "ORB was the finest fanzine these palsied palms have ever clasped."

In his November 1952 "Clubhouse" column for Amazing Stories, Rog Phillips mentions that featured in the latest Orb (#3.1) was a three way collaborative play from Fritz Leiber, Judith Merril (Temper!, Science*Fiction), and Fredric Brown.

Bob Johnson was a committee member for the Chicago Worldcon, and co-composer with Ray Nelson of the score for the ballet Asteroid performed at the Chicago Worldcon. He later published Postways, a fanzine sponsored by the National Fantasy Fan Federation