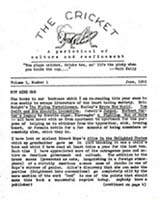 The Cricket was a science fiction fanzine edited by Betsy Curtis and published by Betsy and Ed Curtis.

The Cricket, subtitled "A periodical of cutlure and reefinement", was edited "at their editorial offices, mimeograph salon, studio, dishwashing and ironing parlors, nursery and residence". It was notable for being the earliest fanzine to enthuse over the Walt Kelly comic strip Pogo. The first issue of The Cricket appeared in June 1949, and quoted Walt Kelly on the masthead "You plays cricket, drinks tea, and lifts the pinky when you holds the cup..." Inside, Betsy Curtis talked about her large collection of Pogo strips and other work by Kelly, such as his political cartoons from the New York Star. The Curtises later got a place in the strip, as "Uncle Regular Curtis", the mail-carrying duck.

Betsy and Ed Curtis are the parents of Maggie Thompson, who did one of the pioneering fanzines devoted to comics, Comic Art.

Betsy Curtis was also a writer of science fiction stories that appeared in magazines such as Analog, Fantasy and Science Fiction, Galaxy, and Universe. In 2000, her writing was included in the book Sci-Fi Womanthology, edited by Pam Keesey and Forrest J Ackerman, and published by Sense of Wonder Press.