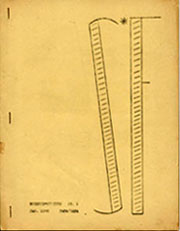 Contributions included writing by Robert Bloch, James Blish (The Planeteer), John B. Michel (The International Observer of Science and Science Fiction, Terrible Tales of Tittering Terror), and "The Hills and the Heights" by Judy Zissman (Judith Merril), an editorial on Hiroshima based on interviews by Judy in New York.

Larry Shaw had previously published the fanzine Leprechaun earlier in the 1940s. In the 1960s he co-published Axe with Noreen Shaw.