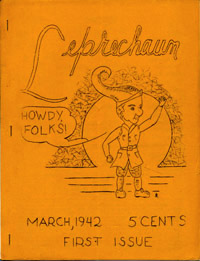 Leprechaun is a science fiction fanzine by Larry Shaw.

Published in the early 1940s in Schenectady, New York, U.S.A., four issues of this mimeographed publication appeared. The first issue appeared in March 1942, and the second and third issues in the same year. The fourth and last issue, an all-poetry issue, wasn't published until March 1945, and was distributed by the Vanguard Amateur Press Association (VAPA).

Letters came from Harry Warner, Jr. (Horizons), among others.

Larry Shaw also published the fanzine Nebula, and then went on to co-publish the fanzine Science*Fiction with Dan and Judy Zissman (now known as Judith Merril), and then, with Noreen Shaw, Axe in the 1960s.