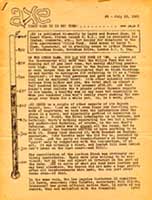 Axe began life on Staten Island, New York, U.S.A. in April 1961 as a newssheet dedicated to to bringing Hyphen editors Walt Willis and Madelaine Willis to the U.S.A. for the 1962 Worldcon, the 10th Anniversary of their first trip to the U.S.A. The 'WAW Fund', which stood for Willis at Worldcon, was a success, and the editors decided to keep publishing Axe as a general interest fanzine after they moved to Evanston, Illinois.

Larry Shaw had previously published Leprechaun, followed by Science*Fiction, co-published with Dan and Judy Zissman, later known as Judith Merril, in the 1940s.