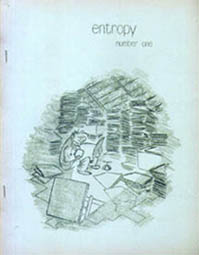 Entropy was a science fiction fanzine by Terry Carr.

Entropy was dedicated to reprinting work by fanzine writers that had appeared as contributions in older fanzines (not their own fanzines), and combining them with newer illustrations.

At the same time as the fanzine, Terry Carr also released Entropy Booklets, which were comprised of entire stories reprinted from fanzines. The first one featured the story, "Crime Stalks the Fan World" by F. Lee Baldwin (The Star Rover), with illustrations by Ray Nelson.

After this one issue of Entropy appeared, Terry Carr began to produce a column, called Entropy Reprints, for other fanzines. Starting in Joyce Katz's Potlatch, it then began to appear in other fanzines such as Energumen and Holier Than Thou.