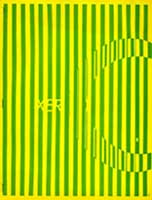 Xero was a fanzine published by Patricia Lupoff and Richard Lupoff in New York, NY, U.S.A..

In 1960, Pat and Dick Lupoff started Xero, a mimeographed science fiction fanzine that also included general interest subjects, pop culture, and commentary on comics as well. Bhob Stewart was the Art Director. After 10 issues it had become so successful it became too much work for the couple and they ceased publication in 1963. It won the Hugo Award for Best Fanzine in 1963.

Because of its coverage of comics, Xero is considered to be the direct antecedent of later fanzines devoted to comics and featured a flip book supplement with a series of articles on comics called "All In Color For A Dime" by Richard Lupoff, soon joined by Don Thompson (Comic Art).

The fanzine included Lin Carter's essays, "Notes of Tolkien"; a review of Psycho by Harlan Ellison; a review of Kingsley Amis' study of SF; New Maps of Hell by James Blish; and Donald Westlakes's farewell to SF.