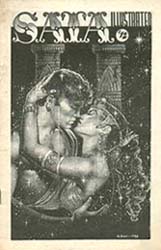 Sata Illustrated was a science fiction fanzine by Bill Pearson and Dan Adkins.

The first issue appeared in 1956. It was reproduced using a ditto machine. Sata featured weird fiction, comics, and illustrations, with an emphasis on lots of Illustrations, since both editors were artists. After 6 issues had been released Adkins left the zine and Pearson carried on without him. 15 issues were released, the last in February 1964.

Fiction was by Bob Leman, Charles L. Morris, and Bob Warner, among others. Articles were by Larry Shaw (Leprechaun, Science*Fiction, Axe), among others.

Letters came from Harvey Kurtman, among others.

On his website, Steve Stiles writes; "Perhaps few people remember Dan's activities in s.f. fanzine fandom, but in the late fifties he and Bill Pearson were producing the most attractive dittoed fanzine, Sata Illustrated, that I've ever seen --a fanzine that was instrumental in getting me into fandom."