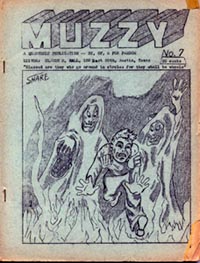 Muzzy was a science fiction fanzine by Claude Hall.

Muzzy was released in the 1950s in Austin, Texas, U.S.A. It was the only science fiction fanzine released in Texas at that time. It was a mimeographed fanzine featuring short stories, articles and letters. Illustrations were by Don Duke, Bill Pearson (Sata Illustrated), and Nancy Share (Hodge-Podge, Ignatz).

Recounting those days, Claude Hall says, "Mimeographed it myself on a $30 Sears Roebuck machine that didn't print very well which I suppose was okay because most of the stuff in that fanzine wasn't really worth reading."

However Richard Brandt, in the 1997 Southern Fandom Confederation Handbook & History says, " Claude Hall is known to have published a well-known fanzine, Muzzy, from El Paso during the Fifties...", so perhaps Mr. Hall is just being modest.

The fanzine ended when Hall was drafted for the Korean War.

Claude Hall also published the SAPS fanzine Claudius in the 1950s, and contributed to fanzines such as Inside and Science Fiction Advertiser, Quandry, and Nite Cry by Don Chappell, wrote short fiction, which was published in Other Worlds, edited by Raymond Palmer (The Comet), and later several novels, such as Down on the Corner of the Earth and his most recent, the horror novel WALL.