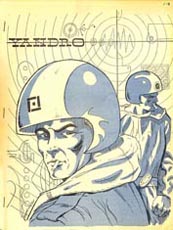 It was first published in 1953 and ran till 1985, with 259 issues released. The last issue was not distributed till 1991. Yandro began life as the organ of the Eastern Indiana Science Fiction Association, originally called EISFA and edited by Juanita Wellons (before becoming Juanita Coulson) and Beverly Amers (later Beverly DeWeese). Juanita married Robert "Buck" Coulson in 1953, and he began doing book reviews for the zine. By the late 1950s the name had been changed to Yandro, derived from an old folk song in a Manly Wade Wellman story.

Yandro featured fiction, articles and reviews of books and fanzines.

Letters came from Philip Jose Farmer and Fredric Wertham, among others.

Juanita Coulson was also the publisher and co-editor, with Kay Anderson, of ST-Phile.