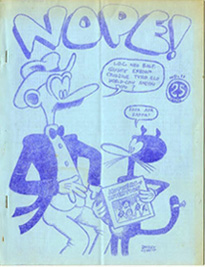 Nope! was a fanzine by Jay Kinney.

Jay Kinney wrote in issue 5 that his fanzine was, "A personal letter substitute and esoteric fanzine". It was a dittoed publication, printed on Dave and Steve Herring's ditto machine at the same time that they were all publishing Odd fanzine. Approximately 100 copies of each issue were printed.

Also included were articles, such as "Fabulous Fannish Museum" by Arnie Katz (FIAWOL) and rich brown, and a review of a Jimi Hendrix concert.

In retrospect Nope! is frequently referred to as a "counterculture" zine, since it featured several of the most prominent underground artists of that era whose reputations would continue to grow in the coming decades.