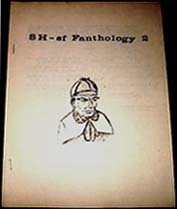 SH - sf Fanthology is a fanzine by Ruth Berman.

Issue 2, which was printed in 1971, features writing by Dean Dickensheet (from No), Doug Hoylman (from The Proper Boskonian), Edward Ludwig (from Inside), and John White (from Fistula).

Issue 3 was released in 1972, with contributions from Ruth Berman (from Oziana), Richard Lupoff (from Pok-Pik '66 Souvenir Booklet), Priscilla Pollner (from Son of a Beech), and Mary Ellen Rabogliafti (from Despatch).

Ruth Berman also contributed to the Baker Street Journal (March 1963), devoted to the study and appreciation of Sherlock Homes.

In the late 1950s, Ruth Berman had published All Mimsy with Eleanor Arnason and Ron Whyte. In the early 1960s, Ruth Berman did the fanzines NeoLithic, Dinky Bird, Nous, No, and Pantopon, and in the late 1960s, the media science fiction fanzines Despatch, Inside Star Trek, T-Negative, and The Star Trek Songbook.