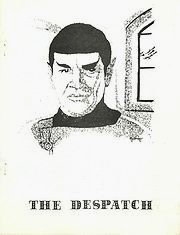 Despatch was the official organ of the Mark Lenard International Fan Club, a club that was based in Minneapolis, Minnesota, USA. Published from October 1968 until the early 1980s, 44 issues were released. Mark Lenard was an actor who appeared as the Vulcan character "Sarek", father of "Dr. Spock", on the original television series run of Star Trek, and as various other characters in the later Star Trek films. During the run of the fanzine, the title alternated between Despatch and The Despatch. It was one of the earliest fanzines devoted to Star Trek to feature fan-fiction. There was also cross-over fiction that featured the other television series that Mark Lenard appeared in, including Hawaii Five-O, Here Come The Brides, and Planet of the Apes. Also included were letters of comment, articles, art work, essays, songs, photos of Mark Lenard, poetry, crossword puzzles, cartoons, con reports, and reviews.

Contributors of cartoons included Paula Nass, among others.

In the late 1950s, Ruth Berman co-published All Mimsy with Eleanor Arnason and Ron Whyte. In the early 1960s, she published NeoLithic and Dinky Bird, and then later in the decade, Despatch and Inside Star Trek, two of the few fanzines to appear during the original run of the television series, which was followed by T-Negative. In the 1970s, she also published The Star Trek Songbook. In the 1960s and 1970s, Ruth Berman was also publishing the Sherlock Holmes anthology, SH - sf Fanthology.