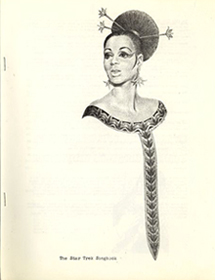 The Star Trek Songbook was a media science fiction fanzine by Ruth Berman.

The Star Trek Songbook was devoted to music associated with the 1960s television series Star Trek. The first edition was published in Minneapolis, Minnesota, U.S.A. in Summer 1971, and the last edition appeared in 1976. It featured articles, photographs, art work, letters, and song lyrics and music.

In the first edition, Ruth Berman introduces the zine, saying, "The Star Trek Songbook is a compendium of all the songs sung in episodes of 'Star Trek' and some that weren't, along with scenes discussing Federation music."

In the 1950s, Ruth Berman had co-published All Mimsy with Eleanor Arnason and Ron Whyte. In the early 1960s she published first NeoLithic, then Dinky Bird, and in the later 1960s, Despatch, and Inside Star Trek, two of the few fanzines to appear during the original run of the television series, followed by her next Star Trek related fanzines, T-Negative and The Star Trek Songbook. In the 1960s and 1970s, Ruth Berman was also publishing the Sherlock Holmes anthology, SH - sf Fanthology.