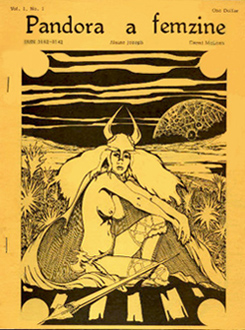 Pandora was published from 1978 till 1993. Twenty nine issues appeared in that time. It was founded and edited by Lois Wickstrom in Denver, Colorado, U.S.A., from the first issue published October 1978 to issue 9, released September 1982. The publication was then assumed by Jean Lorrah (who had been associate editor on issues #8 and #9) in Murray, Kentucky, from #10 (Summer 1983) to #17 (Fall 1987), serving as co-editor with Wickstrom. Publication was then taken over by Meg MacDonald (who had been associate editor on issues #16 and #17) who became sole editor from #18 (Winter 1988) to the final issue, #29, released Spring 1992.

For the first two issues the publication was titled Pandora a femzine. The motto for issue 2 reads, "If Pandora hadn't been curious, there would be nothing to write about". The mandate of the zine was to raise awareness of women's writing. After that, the title changed to Pandora: role expanding science fiction and fantasy till issue 9, after which it was simply Pandora.