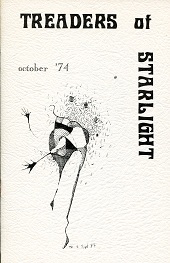 Treaders of Starlight was a speculative and science fiction poetry zine edited and published by Mark Rich and Rebecca S. Marcus in Ottawa, Kansas, U.S.A.

Two issues were published, the first in October 1974, the second in August 1976. The second issue was published from Kansas City, Missouri.

Mark Rich was also co-editor of The Silent Planet, with Mike O'Dell and Tobin Nellhaus during the 1970s. In the 1980s he co-founded The Magazine of Speculative Poetry with Roger Dutcher.