The Literary Magazine of Fantasy and Terror 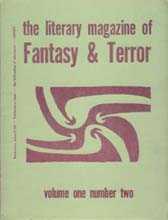 The Literary Magazine of Fantasy and Terror was a fanzine edited by Phyllis Ann Karr and Jessica Amanda Salmonson and published by The Fellowship of Odysseans in Zenith, Washington, U.S.A..

Artwork included a reprint of work by Hannes Bok.

Later, in the 1980s, there was a quasi revival of the title as a professional publication.

Jessica Amanda Salmonson went on to edit Fantasy Macabre in the 1980s.