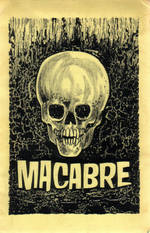 Macabre was founded in 1957 to "work for the revival" of Weird Tales, a Pulp magazine that Brennan had written for. He also wanted Macabre to "serve as a rallying place for all those devoted to horror and the supernatural". Twenty three issues were released, the last one in 1976.

Issues of Macabre included Brennan's "Lucius Leffing" stories, and well as other of his well known stories and articles on H. P. Lovecraft": "Time and Lovecraft" and "Lovecraft on the Subway". The ninth issue (Summer 1961) also featured an article on H.P. Lovecraft by Brennan.

Several stories in Macabre have been cited as essential to Lovecraft's Cthulhu Mythos.