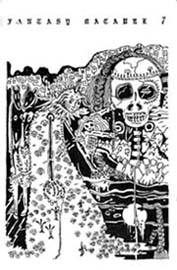 Fantasy Macabre was a literary zine devoted to fantasy and terror fiction.

The first issue of Fantasy Macabre appeared in 1980. The first two issues were published by Dave Reeder in London, UK. Richard Fawcet took over publishing duties with issue 3, released in 1982 in Uncasville, Connecticut, U.S.A., although Dave Reeder remained editor. Starting in 1985 with issue #5, the editor of Fantasy Macabre was Jessica Amanda Salmonson, continuing until the last issue, #17, released in 1996. The subtitle for this period was "Beauty plus Strangeness equals Terror".

As well, reprints of work from the 'Golden Age' of fanzines appeared, by authors such as Edith Ogutsch, Frank Belknap Long, Lilith Lorraine (Challenge, Different, Flame), Dorothy Quick, and others, and artists such as Carlo Beuf.