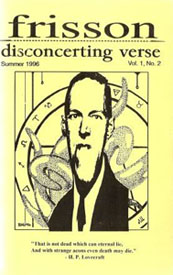 Frisson, subtitled "disconcerting verse", was devoted to dark verse in the horror, macabre, and weird genres. It was published in Wilmington, North Carolina, U.S.A. The first issue was released in 1996, and it ran at least to 2001 (#23 is dated Autumn 2001).

Artwork was by Allen Koszowski, among others.