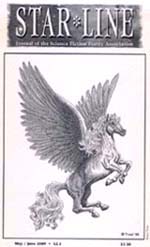 Star*Line was founded in January 1978 by Suzette Haden Elgin as a forum and networking tool for poets writing speculative and fantastic poetry, which includes everything from science fiction, to the macabre, to straight science, to the surreal.