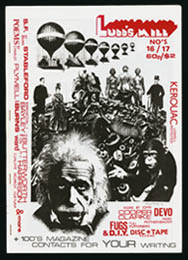 Ludd's Mill was a fanzine edited by Andrew Darlington.

It began life as a community alternative and was 'rescued' by Darlington . It was released in the 1970s and 1980s in Ossett, Yorkshire, UK.

The article "DIY'ing in the Bedroom - Yorkshire's Fanzines", from Ayup! Magazine, says, "Ludd's Mill, from Ossett, was an intelligent 'zine, the brain child of Andrew Darlington."

Ludd's Mill featured articles on various aspects of alternative culture, including music, art, books, fiction and poetry, with features on bands such as Devo, and The Fugs, among others, as well as reviews of books, records and tapes.

Artwork was contributed by Harry Turner (Zenith, Now & Then, Zimri).