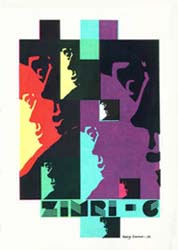 Zimri was a science fiction fanzine from the UK published by Lisa Conesa.

The first issue of Zimri appeared in July 1971. It was edited by Lisa Conesa with Phil Muldowney for the first issue. For the second and third issues Andrew Stephenson was co-editor. Harry Turner (Now & Then, Zenith) became Art Editor by 1974. The zine notably included poetry, which had been out of favour with zine editors for a number of years. Now it began a return to zines.

Zimri won the Nova Award for Best Fanzine in 1974, tied with Big Scab by John Brosnan. It also won the Checkpoint Readers Fan Poll as Best Fanzine for 1973-1974, and Harry Turner won Best Fanzine Cover for Zimri #6 (reproduced at right).