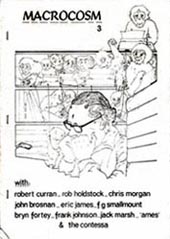 Macrocosm was a literary and fantasy small press publication by Robert Holdstock (1948-2009).

Macrocosm was first published in December 1971 in London, England. Three issues were released, the last in July 1972. Each issue was around 48 pages.

Also included was an interview with artist Andrew Stephenson in Issue 3.

Robert Holdstock was the author of over 30 books, including the World Fantasy Award winning Mythago Wood, and the Merlin Codex series of books.