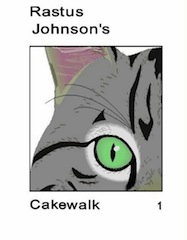 This was Pickersgill's 1990s fanzine that followed Fouler and Stop Breaking Down, and was named after a piano piece by Scott Joplin. The first issue appeared in September 1993 and after seven issues it ended, in October 1994.

Letters came from David Redd, among others.

It won the Nova Award for Best Fanzine in 1994.