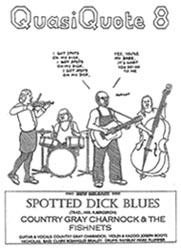 QuasiQuote is a science fiction fanzine published by Sandra Bond.

QuasiQuote is published in London, England. The first issue appeared in October 1999, and continued into the 2000s. There was a five year gap betwen the publishing of issue 5 and the 6th issue, released in 2008.

Sandra Bond also edited the fanzine Bogus in the 2000's.