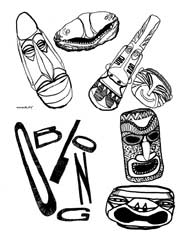 Oblong is a personal journal fanzine by Bruce Townley.

It featured strange, absurd, and sometimes humorous articles, and reviews of weird books and movies. There were articles that mentioned the Winchester Mystery House, Big Daddy Roth graphic software, and Film Noir. There were also fanzine reviews and a letter column. The cover of issue #5, featuring the actor Jack Nance as he appeared in the film Eraserhead, was by editor Bruce Townley.

Bruce Townley previously published the fanzines Le Viol and Phiz in the 1970s.