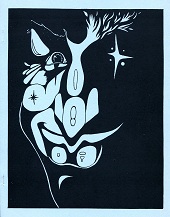 Star Fire was a science fiction and fantasy fanzine by William Breiding.

Star Fire was published in the 1970s in San Francisco, California, U.S.A.