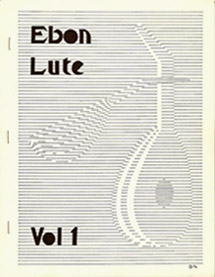 Ebon Lute was published in San Francisco, California, U.S.A. in the 1970s.

The front cover for issue two was by Denis Tiani. Illustrations were by Harry O. Morris and Claudia Suen, with reproductions of work by Albrecht Durer.

G. Sutton Breiding went on to publish The Punk-Surrealist Cafe in the 1980s.