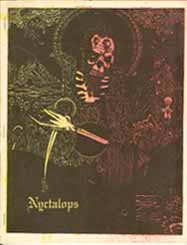 Nyctalops was a fanzine edited by Harry O. Morris and Edward Paul Berglund published in the 1970s and 1980s.

Nyctalops is devoted to H. P. Lovecraft and his circle, Clark Ashton Smith, and Robert Bloch. It is an 8.5 X 11" publication of approximately 100 pages that was published in Albuquerque, New Mexico, U.S.A. The first issue appeared in May 1970. Nyctalops was initially published solely by Morris and consisted of literary criticism, but after issue three he asked Edward Berglund to become fiction editor for the zine and commencing with issue four the fanzine included fiction. The two editors worked together for seven more issues, with nineteen issues released in all.

Also included were reprints of the writing of Robert E. Howard, Frank Belknap Long, and Clark Ashton Smith, among others.

Nyctalops #1 was published in May 1970. It contained the essay The Strange Lands of Clark Ashton Smith by Harry Morris. The issue had 12 pages. There were 100 copies printed.

Nyctalops #7 was published in August 1972. This issue was focused on Clark Ashton Smith and featured, besides the works written for the zine, some reprints of his stories and art. It had 100 pages.

Nyctalops #13 was published in May 1977. It contained interviews, fiction, poetry and articles by, among others, Brian Lumley, T.E.D. Kline, John Taylor Gatto, Patti Smith, William Scott Home and art by Bukku Be Zaro, Leslie Hall, Bill McCabe, Johann Peterka. It had 50 pages.

This issue was dedicated to the Surrealist artist and writer Leonora Carrington.