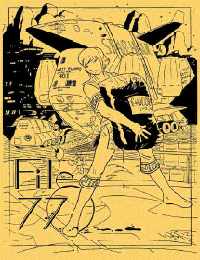 File 770 is a science fiction fanzine by Mike Glyer.

File 770 is published in Sierra Madre, California, U.S.A. The first issue appeared in January 1978, and has appeared regularly since then, with 160 issues published in that time.

The fanzine includes fandom news and commentary, convention reports, reports on awards, articles and lots of artwork, photographs, and letters.