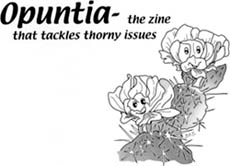 Opuntia is the name for a series of zines by Dale Speirs from Calgary, AL, Canada.

As Speirs says in his intro to Opuntia, “Whole-numbered Opuntias are sercon, x.1 issues are review zines, x.2 issues are indexes, and x.5 issues are perzines.”

In 2005, Opuntia won the Aurora Award for Best Fanzine Fan Achievement Award from the Canadian Science Fiction and Fantasy Association.

However, Opuntia is not limited to just science fiction, since each issue is different. Dale Speirs is active in the mail art community and some issues are devoted to this topic. Other topics have included rubber stamping. Opuntia also reviews zines and prints a number of letters from readers in most issues.