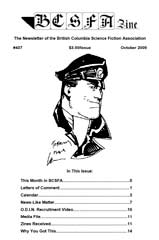 BCSFAzine is a very long running publication which began publishing in September 1973, with more than 460 issues published as of 2011. It includes news, commentary, articles, zine reviews, letters of comment, a calendar of SF related events in British Columbia, and the minutes of BCSFA meetings.

Photographs have been contributed by Joseph Picard and Felicity Walker.