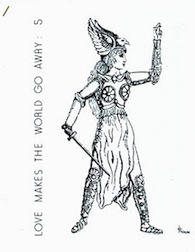 Published in British Columbia, Canada, Love Makes The World Go Awry was a perzine, devoted to the editor's personal life, poetry, and a letter column. The first issue was released in December 1979. In 1980, issue 2 appeared in March; issue 3 in June; and issue 4 in September. Issue 5 came out in June 1981, and the last issue, issue 6, was published in August 1983.